European Elections in the North West 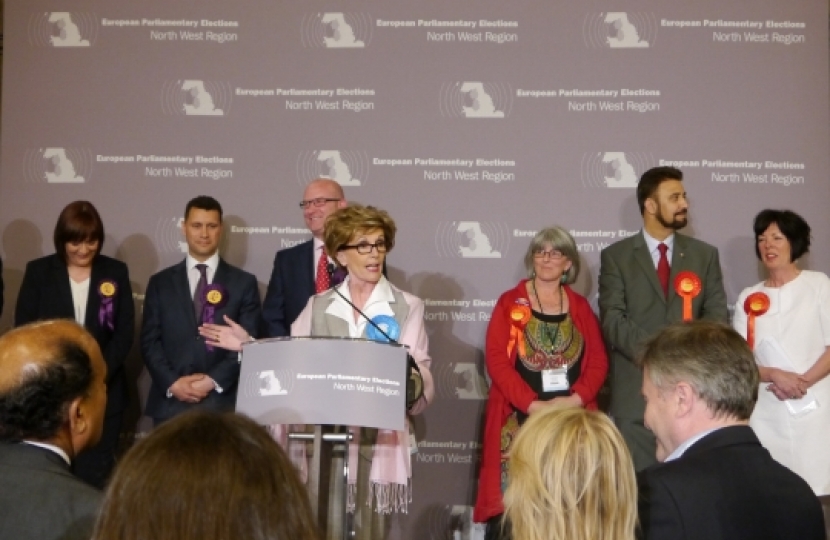 North West Conservative MEP and Deputy Leader, Jacqueline Foster MEP, re-elected on Sunday, has thanked voters for their support in the European and local elections.

Jacqueline said: "To those voters who stuck with us, thank you!  And to those who may have left us, hopefully temporarily, we will work to regain your vote over the coming months as we head towards the General Election.  The choice could not be clearer - between us, with our plan for the economic recovery and an In-Out Referendum - or Ed Miliband.

"I have also written today to our teams of activists across the North West - in the Associations, the Clubs and Conservative Groups - for their tireless work in the campaign, the contributions from our MPs and Parliamentary Candidates.

"The Party across the North West has worked tirelessly alongside our Regional Director, Diane Clark OBE, the European Election Agent, Simon Eardley and his team of staff.   Between us, we have covered thousands of miles, from Carlisle to Crewe.

"It was disappointing that we could not secure our third seat - Kevin Beaty is a great asset to the Party in the North West and would have made a great colleague in the European Parliament.

"Finally, my thanks to the Returning Officer, Sir Howard Bernstein, and the Electoral Staff across the Region and the Police, for ensuring a free and fair election."

The full north west results are-