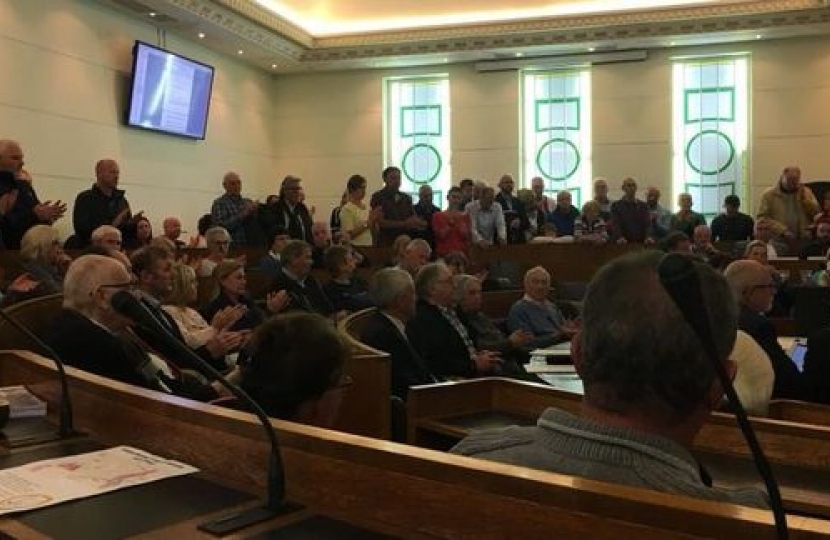 Conservative Leader, Cllr. David Westley, said: “The large number of local residents who attended last week’s Cabinet Meeting succeeded in demonstrated their fully justified opposition to Labour’s new Local Plan. However, I am critical of Our West Lancashire for misleading residents as to the nature of the meeting and the Labour Administration for how they failed to deal with the situation.

Our West Lancashire used social media and leaflet to urge residents to attend what they called a “council meeting” and that there would be a “councillors vote” which gave the clear impression that it was a meeting of the Full Council and likely to include a full debate on the Local Plan Preferred Options. Cllr. Adrian Owens knew full well that Cabinet Meetings never include meaningful debate as only the Cabinet Members speak and usually just ‘rubber stamp’ decisions that have effectively been agreed beforehand at Labour Group Meetings and informal Cabinet Meetings. Other Councillors are not allowed to speak and only a limited number of Members of the Public can do so by prior arrangement.

The Leader of the Council chaired the Cabinet Meeting and failed to manage the situation. Firstly, he allowed far too many people into the Council Chamber and almost certainly breached the safety regulations. I seem to remember that on similar situations in the past, public attendance was limited to 50 yet more than twice this number were allowed in last week. He then failed to explain to residents the true nature of the meeting and the absence of a meaningful debate. If he had been decisive at the outset, been more communicative and managed the situation, the subsequent public frustration could have been avoided as well as the perceived need to call out the Police.

Our West Lancashire are behaving like a protest group rather than a credible political party. They are now holding what they what they term resident meetings which are really protest rallies designed to inflame feelings. I urge residents to follow the due process for deciding on a new Local Plan and to respond to the Public Consultation being run by the Borough Council from 11 October to the 23 November.

If the Public Consultation fails to make Labour see sense, scrap their crazy new Local Plan and start again then residents have the democratic option of punishing them at the Ballot Box. There will opportunities to do this before the new Local Plan is formally adopted i.e. at the Borough Elections in May 2019 and 2020.

The Conservatives are fundamentally opposed to Labour’s new Local Plan and demonstrated it by proposing the following statement at the Planning Committee Meeting on the 6 September. As expected, Labour used their majority to defeat the proposal.

The Conservatives will try again at the Executive Scrutiny Overview & Scrutiny Committee Meeting on the 27 September. The Public can attend and may speak by prior arrangement. At the Meeting the Conservatives will set out their reasons for opposing Labour’s Local Plan and hopefully the Labour members will be prepared to join in and make it a meaningful debate.”

The Preferred Options recommend scrapping the existing Local Plan that still has 9 years to run yet it is meeting local housing need, has delivered the planned number of new homes and continues to provide the necessary 5year supply of housing land. It has also withstood legal challenges in respect of rogue developments and proved to be robust.

The proposal for a new 30year Local Plan 2020/50 is unprecedented and it is felt impractical to accurately forecast that far ahead, the future housing and employment needs of the Borough. The proposal to plan for 15,992 new homes can only be a very rough estimate given the official population forecast only project to 2041 and even the Treasury has difficulty forecasting medium term economic growth.

It is also proposed to stop the established practice of safeguarding sites identified for future development. This would mean the Council abdicating its responsibility to manage the release of sites and allow developers, or “market”, to decide which sites should be developed first. It would also mean that all the sites needed for the next 30 years would be made available for development from 2020/21.

The proposed release of up to 1,500 acres from the Greenbelt or Safeguarded land is cause for considerable concern. The need to take such drastic action is a direct consequence of the issues detailed above.

The Conservative Group urge Cabinet to reject the Preferred Options and instruct the Local Plan Review Cabinet Working Group to prepare new proposals that are in line with the original remit i.e. to review the existing Local Plan 2012/27 and make suitable recommendations to update, amend and perhaps extend it for a further 5 or 7 years."